How the Sword has influenced Taekwondo

I have been playing around with the sword lately and I am having a lot of fun doing it. Sword training is perfect for the times we are finding ourselves in these days: you always keep at least a swords distance between yourself and your training partner, if they come to close you hit them. If you are practising alone no one will come close to the crazy guy swinging a sword arond and so it is also great at social distancing 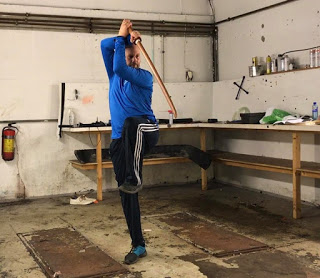 This is not a post on how fun I am having or how I train, but rather how the sword is related to an unarmed martial art such as Taekwondo. It is now time to go back in history.

Taekwondo's roots is firmly embedded within Karate. Anyone telling you something else is full of something brown (and it is not chocolate). All of Taekwondo can be traced directly back to Gichin Funakoshi, Toyama Kanken, and Mabuni Kenwa. These in turn learned from Anko (and Azato) Itosu and he in turn learned from "Bushi" Matsumura. Let us start here:

"Bushi" Matsumura or Matsumura Sokon lived aproximatly 1798-1890 (there is a lot of debate on the exact dates) and he lived at a time before Karate as we know it today existed. He is the great grandfather of Karate so to speak. He practised whatever martial arts he could get his hands on, and interestingly to this blog post he did a deep dive into the Satsuma Samurai's martial art of Igen Ryu Jujitsu. This martial arts consisted among other things the sword as you would expect this being a Samurai Martial Art. Matsumura Sokon studied Jigen Ryu to the point that he got a Menkyo Kaiden or a certificate of total transmission. This was a huge deal meaning he could teach this art on. In fact this means that Matsumura probably knew more about Jigen Ryu than many of the Samurai stationed on Okinawa at the time! Matsumura taught his students the principles of what he learned so Jigen Ryu had an impact on his "karate", and he was among the foremost masters of the time meaning that the sword had an impact on proto karate.

If you go a little forward in history to the next generation of students you will find that the sword continued to influence martial arts masters on Okinawa. Funakoshi's main teacher Azato for instance is said to have preffered the sword over his unarmed martial art, and he too got a Menkyo Kaiden certificate in Jigen Ryu.

Once Karate was imported to mainland Japan in the 1920s and 1930s Karate became very influenced by the other two greatly popular Japanese martial arts at the time; Judo and Kendo. Ken meaning Sword and Do meaning way. Kendo became popular in occupied Korea too under the Korean name Gumdo (Gum being the Korean pronounciation of Ken). Shotokan which is perhaps the most influential Karate root of Taekwondo was the Karate style mostly influenced by Kendo as most of the early students had a Kendo background. Many of the early masters of Shotokan including Gichin Funakoshi's son Yoshitaka "Gigo" Funakoshi was a highly trained student of Kendo. Kendo influenced the footwork, the stances and the distancing in Shotokan, and the three and five steps sparring came in part as an influence from Kendo as well as Judo. The competition aspect that was being developed (and hated by Gichin Funaskohi) in the 40s and 50s was also very much based around Kendo. The people who would go on to develop Shotokan after Funakoshi's death in 1957 were highly trained Kendo students as well as Karate students.

As I wrote earlier, Kendo was imported to Korea before Karate ever was, and it was very popular under the name Gumdo. Contrary to popular belief Gumdo was simply a copy of Kendo and not a 2000 year old Korean sword art. Many early students of what was to become Taekwondo also trained for some time in Gumdo. Like I do today many picked up the sword art to be an addition to their training since many of the Karate masters before them had done so as well. Over time this trend has been a steady one, but these days people are much more drawn to Korean sword arts like haedong gumdo which is a relativly speaking a newly developed martial art trying to incorporate Korean body culture etc into the sword training. Other Korean arts that incorporates sword is Sippalki and Kyeongdang which both are using the Korean military martial arts manual the muyedobotongji as their source. The Muyedobotongji uses both Chinese and Japanese sources along with some possible Korean sources (the Korean sources were debated in the book itself). 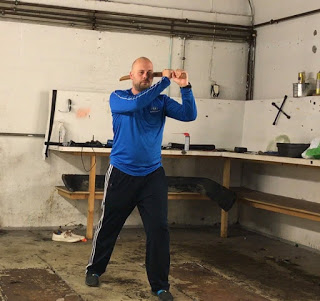 While modern Taekwondo does not really have any formalized weapons training in them, you will see that the three step sparring format that we inherited from the 1920s and 30s Japan is still alive and still Kendo (and Judo) based. You will also note that many of our high ranking masters have studdied Sword martial arts on the side to learn a weapon in addition to Takewondo's unnarmed martial art. In the Kukkiwon Textbook you will even see defences against the sword being demonstrated, which shows a remnant of this even today.