Judging by the number of odd weapons that can be found in the martial ways of China, the Chinese are, if nothing else, very creative when it comes to finding ways to kill their fellow man. In the Chinese martial arts, there are four basic weapons; the staff, spear, sword (which is double-edged), and broadsword (which is curved with a single cutting edge). Then, as is to be expected, there are numerous variations on these four – various types of spears, swords, and so on. However, there are a considerable number of other weapons as well. Quite a number of these are very creative and require considerable training. I’ll show just a few here 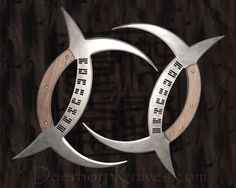 The first is known as the “deer antler knives” (lujiaodao, 鹿角刀), also known as crescent-moon knives or mandarin duck knives, feature two crossed crescent- shaped blades. Found only in the style of baguazhang, the blades are sharp inside and out and enable to practitioner to entrap his enemy’s weapons at the instant it is touched. Subsequent slashes actually gouge first with the tip of one blade, followed by another gouge or slice made with the second knife. It’s very much like stepping into a blender, especially when combined with bagua’s unique footwork. This weapon was allegedly created by bagua’s founder, Dong-haiquan, who is said to have used them successfully in warding off would-be bandits. The deer antler knives never saw military use, however. Perhaps that’s because they’re rather awkward to carry around (there is no sheathe for them)…

The rope dart (sheng biao, 绳镖) is one of the flexible weapons used in gong-fu. It consists of a long rope (about 10-15 ft.) with a metal “dart” (which often has a sharpened tip) attached to one end. The rope is twined around various parts of the body (particularly certain joints) and then suddenly released, shooting the dart out directly at the foe. The first written description of this odd weapon dates to the Tang Dynasty (618-907 AD). It is a cousin to the better-known nine-section steel whip (which also comes in seven or even three sections). Tubular-shaped sections of steel are joined with metal rings and a pointed steel tip forms the last piece. It can be as dangerous to the user as the opponent. Of course, neither of these weapons ever saw military service, and I have to ask myself what kind of civilian would walk around with one of these 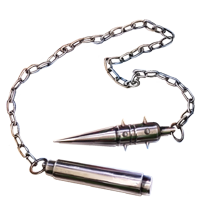 Throwing weapons are placed in the category known as an-chi ( 暗器), which translates as “hidden weapons” and includes everything from throwing knives to darts and even sharpened coins. Such devices were often hiddn inside the flowing sleeves of old Chinese clothing (especially robes). Sometimes, they were even attached to the ankle(s). Old changquan forms feature movements that indicate the practitioner is removing one such weapon, and throwing it at his enemy.

I learned to throw knives when I was just 14 yrs. old. I eventually learned to throw one-piece scalpels, which were used for dissecting frogs and the like, and easily available at the college bookstore. I became skilled enough to put them into a 2” bull’s eye from a distance of about 15 ft. With either hand. It was a lot of fun and I would spend many hours practicing from different positions. 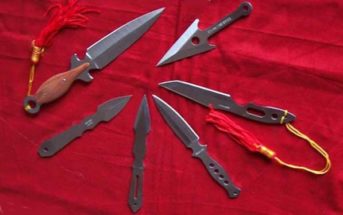 Emei daggers (emeici, 峨嵋刺 ) are a pair of metal rods with sharpened tips use for thrusting. They are typically mounted on a ring, which is worn on the middle finger, allowing them to spin and be easily manipulated. They are said to have originated on Mt. Emei (hence, the name). Because they are attached to the hand via the ring, the palm can be used to slap and strike the opponent’s attacking limb, causing considerable pain. Oddly enough, the Okinawan had/have their own version of it, called a chizenkunbo (which was originally a type of “float” used for fishing nets).